It's that time of year again!! When we all go crazy for a few days, trying to win piles of awesome books! This year, I'm also doing my own personal giveaway, so make sure to read all the way to the VERY BOTTOM of the post for your chance to win a signed ARC of my new release coming November 5th from Tor Teen - SISTERS OF SHADOW AND LIGHT! 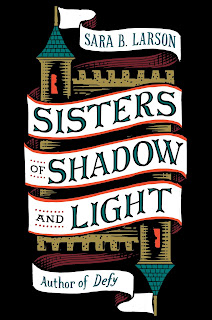 Zuhra and Inara have grown up in the Citadel of the Paladins, an abandoned fortress where legendary, magical warriors once lived before disappearing from the world—including their Paladin father the night Inara was born.
On that same night, a massive, magical hedge grew and imprisoned them within the citadel. Inara inherited their father’s Paladin power; her eyes glow blue and she is able to make plants grow at unbelievable rates, but she has been trapped in her own mind because of a “roar” that drowns everything else out—leaving Zuhra virtually alone with their emotionally broken human mother.
For 15 years they have lived, trapped in the citadel, with little contact from the outside world…until the day a stranger passes through the hedge, and everything changes.
You can pre-order SOSAL by clicking HERE!!! or HERE *for a signed copy*!!

Welcome to YA Scavenger Hunt! This bi-annual event was first organized by author Colleen Houck as a way to give readers a chance to gain access to exclusive bonus material from their favorite authors...and a chance to win some awesome prizes! At this hunt, you not only get access to exclusive content from each author, you also get a clue for the hunt. Add up the clues, and you can enter for our prize--one lucky winner will receive one signed book from each author on the hunt in my team! But play fast: this contest (and all the exclusive bonus material) will only be online for until Sunday!

Go to the YA Scavenger Hunt page to find out all about the hunt. This year I'm on: 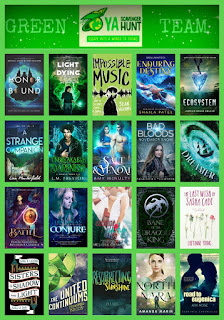 Directions: Below, you'll notice that I've listed my favorite number. Collect the favorite numbers of all the authors on the Green Team, and then add them up (don't worry, you can use a calculator!).

Rules: Open internationally, anyone below the age of 18 should have a parent or guardian's permission to enter. To be eligible for the grand prize, you must submit the completed entry form by Sunday April 7th, at noon Pacific Time. Entries sent without the correct number or without contact information will not be considered.

Here's a little trivia for you - my all time FAVORITE number has always been 21!!!