Well, it's hard to believe it, but we're down to 3 months until DEFY comes out as of today October 7!!

So, as promised, I'm doing my first DEFY ARC giveaway to celebrate! Last week, I gave you the chance to win DEFY swag by giving me an idea of what to do for the giveaway...but there were quite a few good options to choose from. I wish I could have picked them all, but there were too many. However, instead of just picking one, since there's three months left until the book comes out, I choose three!

First up is Nova Lee's idea to have you make a mock cover of DEFY! (Nova Lee, make sure and message me your address so I can send you the DEFY swag you won!)

Now, let me just say, I LOVE my cover. It's so perfect for my book. But her idea sounded like a lot of fun--to see what all of you amazingly talented artists/photoshop geniuses/etc. can come up with! (Especially since I have absolutely no artistic talent at all...sorry, but there won't be any cool doodles in any of my signed books. Unless you like stick figures.) However, those of you who are like me, and don't have artistic talent--don't give up yet! Keep reading until the end.

Anyone who does wish to try their hand at the mock cover contest, you will have two weeks to do it--the contest ends at midnight on October 20th, the winner will be announced the week of the 21st. I picked this idea first because it's going to take more effort, and I figured it would be better to do it before the holidays all start to hit and life gets insanely busy.

Here is the goodreads summary to help you decide how to design your cover:

Alexa Hollen is a fighter. Forced to disguise herself as a boy and serve in the king's army, Alex uses her quick wit and fierce sword-fighting skills to earn a spot on the elite prince's guard. But when a powerful sorcerer sneaks into the palace in the dead of night, even Alex, who is virtually unbeatable, can't prevent him from abducting her, her fellow guard and friend Rylan, and Prince Damian, taking them through the treacherous wilds of the jungle and deep into enemy territory.The longer Alex is held captive with both Rylan and the prince, the more she realizes that she is not the only one who has been keeping dangerous secrets. And suddenly, after her own secret is revealed, Alex finds herself confronted with two men vying for her heart: the safe and steady Rylan, who has always cared for her, and the dark, intriguing Damian. With hidden foes lurking around every corner, is Alex strong enough to save herself and the kingdom she's sworn to protect?

And here is the actual cover art, to show you what Scholastic came up with: 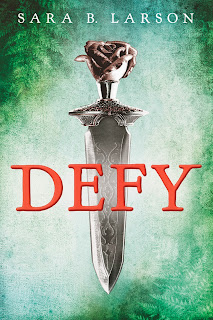 Oh, how I love this cover!! It's so perfect on so many levels.

Once your cover art is ready, please post the image on your blog, or tweet a picture of it to me (@SaraBLarson), or you can tag me on a Facebook post of the cover you create. Just make sure you link to me somehow so I can see that you did it and enter it in the contest. I will pick ONE cover, the that I love the most and think is the best fit for DEFY, to win a signed ARC of DEFY!!

Now, like I said, I know not everyone has artistic talent (especially since I'm one of them), so I've decided that in order to make it fair, I'm also going to do a regular rafflecopter giveaway for a SECOND ARC of DEFY. Yes, you will all have 2 chances to win!! Just do however many options you want below, and may the odds be ever in your favor!

I can't wait to see what you all come up with!! And remember, if you don't win either ARC of DEFY this month, don't give up--there are two more contests coming up in November and December!

*(This contest is open to US/Canada residents only, as per my publisher's instructions.)*


a Rafflecopter giveaway
Posted by Sara B. Larson at 4:00 AM

Yes, yes, yes! Love the fashion for your cover already. :)

What fun! I'm in! Question though: if I post it on my blog, can it just be a picture of whatever I've drawn(obviously in book format)? I'm very low-level tech, lol! =)

Fun idea! I'm not artistic but I want to see what other people come up with.

Your cover is awesome! I wish I had more artistic ability, but I also really like the cover of A Curse as Dark as Gold by Elizabeth Bunce (and the title) and Entwined by Heather Dixon.

Great idea! I love your cover, but sadly I have no artistic talent, oh well! :)

Some of my FAVORITE book covers are Unearthly and Across the Universe! :D

I love this idea -- even though I'm not going to be one of the artists. I think that a lot of readers form a picture in their minds of the perfect cover for their favorite books and I love that you're giving them a chance to express that.

Ooh hooray! I won't be designing a cover, because my talents don't lie in that area, but one of my favorite covers is REBOOT by Amy Tintera.

I LOVE how classic and iconic your cover is! Covers that focus on one strong item are so compelling. And it just screams fantasy.

Also, for those of us who are going to attempt designing a cover, do you think you could maybe describe what Alex looks like? Or give us any other hints as to the look of it? :D Thanks for the chance to win!

Some of my favorite covers are Seven Realms series by Cinda Williams Chima, The School for Good and Evil
by Soman Chainani, The Selection Trilogy by Kiera Cass.
Anyway Thanks for the chance to win =)

I think your cover is so pretty, I don't think I could do any better. The colors are so lovely!

Love the cover--but I think the book sounds like it will be better. :)

You know I am super excited for this one!

Ooh, I might have to try my hand at this one! (With some help from my photoship-wizard bf, likely). What I like about the actual DEFY cover, though, is how it is totally a fantasy cover and actually reminds me of Graceling's. Instant positive connotation right there! :) So excited to get to read it, Sara!

Sara I am so excited for you and I can't wait to read your book!

Sara I am so excited for you and I can't wait to read your book!

I can't wait to have my own copy of DEFY! Seriously, so excited!

Oops. Forgot to answer your questions! I love the Graceling feel of your cover, the Jungle-green and leafy background, and the large font of your title. It's all very eye-catching and a good cover for both girls and boys.

I love the dagger on the cover! Plus, the colors contrast really well! A lovely cover indeed.

and about Defy, I love that it's simple, but still very eye-catching and I LOVE the fading green color!!!

I love the Lunar Chronicles covers! They display their subjects perfectly :)