I had the opportunity to go to the Writing for Charity Evening Extravaganza last Saturday night. Shannon Hale and a bunch of other local Utah authors have started this charity to raise money in order to buy and give books to underprivileged children. Children who may otherwise never own a book in their lives. This was my first year attending, and let me tell you--it was well worth it! Not only to help out the children, and having the chance to bid on some amazing gift baskets and prizes (my friend Stacey [who runs the book review blog mypileofbooks.blogspot.com] won a real "Bella's engagement ring" and I got a family meal deal to SmashBurger. Next year, I am bringing a checkbook and saving my pennies. They had some amazing prizes for auction that I really, really wish I had brought the money to bid on...). But if you need more incentive to come, you could have had the chance to see Utah authors gone wild. Completely crazy. Don't believe me? Then read on. 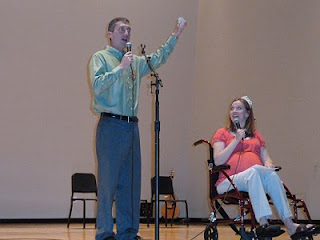 James Dashner and Shannon Hale (who is due with twins in a couple of months) were the co-MCs for the night. I think she first regretted asking him to help her when he pushed her out on stage and then continued pushing her all the way to the edge of the stage and nearly dumped her out of the wheelchair off of the stage. If that wasn't enough to make her question her choice in co-MC, I'm sure she really thought twice when he started auctioning off both of her placentas. Yes, you read that correctly. He used the word placenta multiple times in an auditorium filled with children and teens. Families galore. Oh, if only the inappropriate word usage ended there... (In all seriousness James did a great job with Shannon, and I'm sure she was thrilled with his MC-ing skills.) 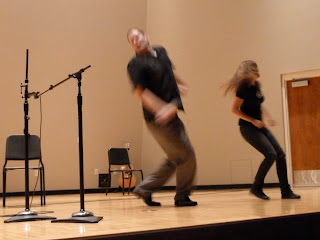 Not to be outdone, Brandon Mull (New York Times bestselling author of FABLEHAVEN and the forthcoming BEYONDERS series) decided to relive his comedy skit troupe days. This particular skit was the best one IMO--a couple of the actors pretended to be different authors, "rewriting" JACK AND JILL WENT UP A HILL in their own styles. Brandon and the woman next to him acted out the different versions. They did the Shakespeare version, the Stephenie Meyer version which was awesome, the monster truck rally announcer version, and the picture is him just before he crashes to the ground, enacting the Edgar Allan Poe version. Which included this death scene where there was much flopping and thrashing on the ground. If only I'd known he had this kind of talent when I lived next door to him a few years ago. Our neighborhood/church parties would have been a whole lot more fun. Seriously, I was shocked (in a good way). He seemed so quiet and shy when I knew him back then. Just goes to show, you never know someone until you make them do improv comedy in front of an auditorium full of people. 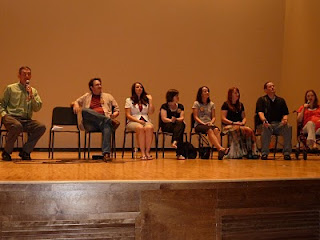 The author panel was great. James got totally let off the hook for his placenta comments, because one of these innocent looking authors completely shot the placenta comment out of the water. Can you guess who? (From left to right this is James Dashner, Brandon Sanderson, Bree Despain, Sara Zarr, Ally Condie, Jessica Day George, Brandon Mull, and Shannon Hale.) 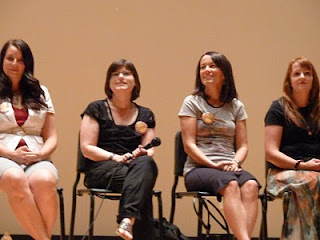 Did you guess one of these lovely ladies? Then you were wrong. 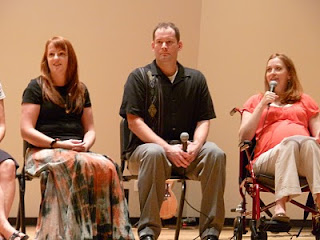 There, that's the guy. Yep, Brandon topped James easily. Just be warned that if you ask him to explain the difference between YA and MG you might get more than you bargained for. Mentions of "blushing crushes" versus "sexual attraction" (or something like that) may be tossed around quite a bit. (Which isn't a big deal, until you remember that young children were there. Lots of them.) But the best part was when he started talking about vaginal births. Yep, placenta wasn't good enough. Brandon knew the only way he could win was to bring up where the placenta comes out. (Okay, we have to cut him some slack, his wife did just have a baby a few weeks ago, so he's somewhat immune to those words right now.) Honestly, it was completely hilarious. And he definitely blushed a little bit. 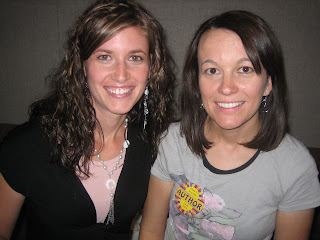 Ally didn't do anything too wild or crazy. However, if you were to try and steal her favorite dessert ever (my brown sugar cookies) you better watch out. She'll go all ninja on you. Okay, not really. And my cookies probably aren't her most favorite dessert, but I know they're up there somewhere. Top ten?


(Side note: I just read the ARC of MATCHED. I wanted to see how different it would be from the pre-published mss I read a year ago. It is every bit as incredible as I remembered, only even more so--which I can hardly believe. Julie, her editor, just polished the diamond that was MATCHED until it is now so brilliant I can hardly stand to look at it directly. If this isn't on your TBR list yet, you'd better add it right now.) 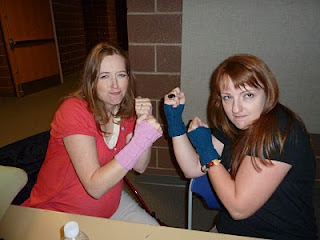 The night ended in fist-fights, complete with knitted gloves. 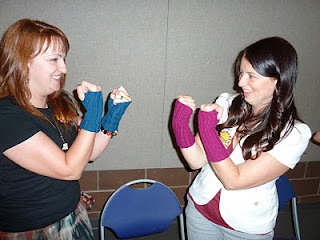 It was touch and go for a while there, but luckily, the yarn was pretty soft, so no one sustained any life threatening injuries.


See? Who says Utah authors can't party? (Does anyone say that? I'm just guessing ...) Anyway, if this recap doesn't make you want to come next year and help the cause, I don't know what will.
Posted by Sara B. Larson at 6:00 AM

Love these pics. Yet another reason I sorta wished I lived in Utah!

So awesome! What a great charity and the event looks like so much fun. LOL at the placenta thing.. almost made me gag on my coffee. I hope something awesome like this comes to my area soon.

Christine - There is such a great writing community here, I love it!

Cheyanne - Gag because it was funny or grossed you out? Either way, I'm glad you enjoyed the post. ;)

So sad I missed it! Too many other things going on :( ... sounded like it was a blast, though!

What an amazing experience! So cool that so many great writers are located near you. *Considers moving to Utah*