Pre-order Madness (aka my way of saying THANK YOU!)

It's hard to believe that yesterday was near 70 and beautiful. Today, I'm sitting at my "desk" (aka, my dining table...if you don't believe me, go HERE) staring out at a blizzard. Oh, Utah. I guess we had a nice October, so I can't complain too much. It is November after all, so it's time for winter to come.

Whether you are excited for snow or not, there is one reason you can be really excited it's November--that means it's only 2 months until DEFY comes out!! Can you believe it? In just over 2 months, my little baby book will be out in the world!

There's intrigue, magic, sword-fighting, hot boys, a totally fierce heroine, hot boys, a kingdom set in the jungle, hot boys... *stares off into the distance, dreaming of the hot boys*

I know that some of you have already pre-ordered DEFY--which just blows me away with gratitude!! That means SO so much to an author, especially a debut author. I'm also guessing that there might be a few more of you out there who are on the fence, trying to decide if you want to pre-order or not. I know that's a big decision to make--to buy something you haven't read, especially when it's the first book in a series.

So I've decided to do something as a way of saying "THANK YOU" to those who already have pre-ordered--and to those who hadn't decided yet, maybe it will be the extra boost you are hoping for to make your decision.

Anyone who pre-orders my book before January 7, 2014 can enter the Rafflecopter drawing (below) to be entered to win one of two "thank-you prizes!!"

One Grand Prize winner will get to choose between getting a signed ARC or a signed hardcover of DEFY + a swag pack made of awesome! You can keep the extra book, or use it for your own giveaway, or gift it to a friend, or whatever you want! Now, why would you want the ARC instead of the hardcover? Well, because there's a little surprise in my ARC that you might want to see. When I got my ARCs, I had no idea it would be there either. I opened it up to look through it and saw an extra page--a letter from my editor, talking about her first experience reading DEFY and why she loves it so much! It pretty much made me cry. So, if you'd like to be able to read that letter, you can choose the ARC. Or if you'd rather have a signed first-edition of the hardcover, then pick that!

**EDIT** I just got word that I can add 2 MORE PRIZES to this giveaway!! You can now win a FREE download of the DEFY audio book, too!!!! EEP! I can't wait to hear this--I love the actress who read the book. WOOHOO!!!

PLUS a second lucky winner will also get chosen for another swag pack made of awesome!!

Wanna see what that swag pack will be? Here you go: 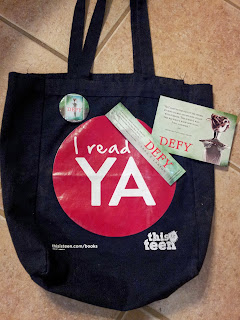 A this is teen "I read YA" bag (Scholastic gave these away at BEA last year, and there are only a few left in the world--how cool is that?!), a beautiful DEFY button (this picture doesn't do it justice AT ALL), a signed bookmark, a signed postcard, and surprise treat in the bag!!

(Psst...For those of you who live by me and might come to my launch party on January 7th at The King's English, I will be doing a raflle with these same swag prizes--except there might also be a few bigger surprises in the bags...like possibly some ARCs of debuts coming out next year! So if you live close by, mark your calendars!)

***And speaking of The King's English--if you want to increase your chances of getting a signed copy (like, by 100%), if you pre-order through them, The King's English will have me sign/personalize your book the night of my launch party and ship it to you! How awesome, right?? GO HERE and you can order online, or you can call them to place your order (801-484-9100). Make sure to specify that you want it signed and/or personalized!***

This contest will run through DEFY's release, on January 7th, 2014 (when it will no longer be possible to pre-order). ;)

Again, whether you pre-order or not, I can't thank you all enough for your support and excitement for DEFY. It means more than you could ever know!! *huge, awkward hugs*

a Rafflecopter giveaway
Posted by Sara B. Larson at 3:00 AM

What an awesome contest! And I already pre-ordrered -- so excited to read this book :-D

I pre-ordered! I'd like to think I was the first person to do so :)

Pre-ordered! You've been an author as long as I've known you. So glad you are getting published!!

Pre-Ordered! :D Can't wait for this!!

I preordered a few months ago! Can't wait to read it.

Great giveaway, thank you!
I actually pre-ordered today because BN has DEFY on asle for a whopping $2.99! Ahh! I was hoping you had a post up in case other deals are happening, lol!

Cant wait! Excited to read it!

Ahhhhhh! What an awesome giveaway.

I can't wait for Defy to arrive on my doorstep!

Just pre-ordered! I know it's only 5 days away, but I'm SO EXCITED!

Sara I am so looking forward to meeting you and I pre-ordered by book with Amazon. Theresa Catlett

Thanks for the giveaway. I pre-ordered on Amazon. Can't wait to read it.

I pre-ordered today!! Congrats on the release! It's SOOOON!!

I pre-ordered today!! Congrats on the release! It's SOOOON!!

If it were at all possible I would pre-order Defy. Unfortunately, due to unforeseen circumstances, I will have to wait who knows how long to read it. Oh well from what I hear, it is definitely going to be worth the wait!!

Just pre-ordered from The Kings English Bookshop woohoo. Hope you have a blast at your Launch Party! xoxo

I totally just pre-ordered from The Kings English. I just couldn't help myself! I tried but I just. Can't. Do. It. So excited for you!

I pre-ordered on B&N - can't wait for delivery tomorrow! :)

I preordered. Congrats Sara! This is really awesome!

I already pre-ordered . I'm looking forward to reading defy and thanks for the giveaway!

Hello! I preordered it from Barnes and Noble just in time! DEFY sounds amazing and perfect for my reading!!!! Can't wait!!!! :D And happy almost release day!!!!

I preordered. Can't wait to read it!

I ordered it at TKE and hope to see you tomorrow night!

I bought it at B&N cause it was out early, so I hope that counts. :)

Well, I preordered the Kindle edition--does that count?! It sounds great!